The word “influencer” is being thrown around a lot in content marketing. What is it? What makes someone an influencer? How can brands use influencers?

An influencer is someone who has clout in a particular community, like travel, fitness or food photography. Boasting a large number of followers and seen as experts in their fields, influencers set trends based on the content and ideas they share. In other words, when an influencer speaks, people listen.

Brands are constantly looking for fresh ways to stand out in an increasingly competitive and creative market. Tapping into influencers is an effective way to build brand awareness. Influencers can help strategize, socialize and maximize branded content and messaging.

Brands have executed some incredible influencer campaigns so far this year. Let’s take a look at my top three favorites of 2015 (so far).

Maybelline Malaysia launched their #DareToNeon campaign, which brought awareness to their newly launched lip balm, Baby Lips Electro Pop. In order to elevate awareness of the new product, they partnered with nine Malaysian Instagram influencers. The brand-generated content was posted on both the brand’s and the influencers’ Instagram accounts using the #DareToNeon hashtag packing a one-two devotee punch. Taking the campaign one step further, they engaged their target demographic (tween to teenaged girls with a passion for fashion, beauty and glamour) with a socially driven contest.

A photo posted by Maybelline Malaysia (@maybellinemalaysia) on Apr 3, 2015 at 9:56pm PDT

Maybelline Malaysia embraced the strong influencer culture already present in the beauty industry and used this to leverage their #DareToNeon campaign on Instagram. By zeroing in on their target demographic from both the brand and influencer angle, Maybelline Malaysia was able to significantly raise awareness of their new product through their strategic campaign. Ultimately, there were more than 700 #DaretoNeon photos posted during the campaign. According to SimplyMeasured, #DaretoNeon content reached more than 300,000 people throughout the duration of the campaign, 128,000 of which directly engaged with the campaign.

Styld.by, Gap’s online style, shop, social and share hub, is a community of influencers showing how they pull together looks incorporating both Gap clothes their own wardrobes. Their looks are self-styled or put together by stylists, and photographed and shared on a variety of social media accounts. Gap benefits from the built-in networks of followers from all of these contributors, along with posting the UGC on their own social channels. 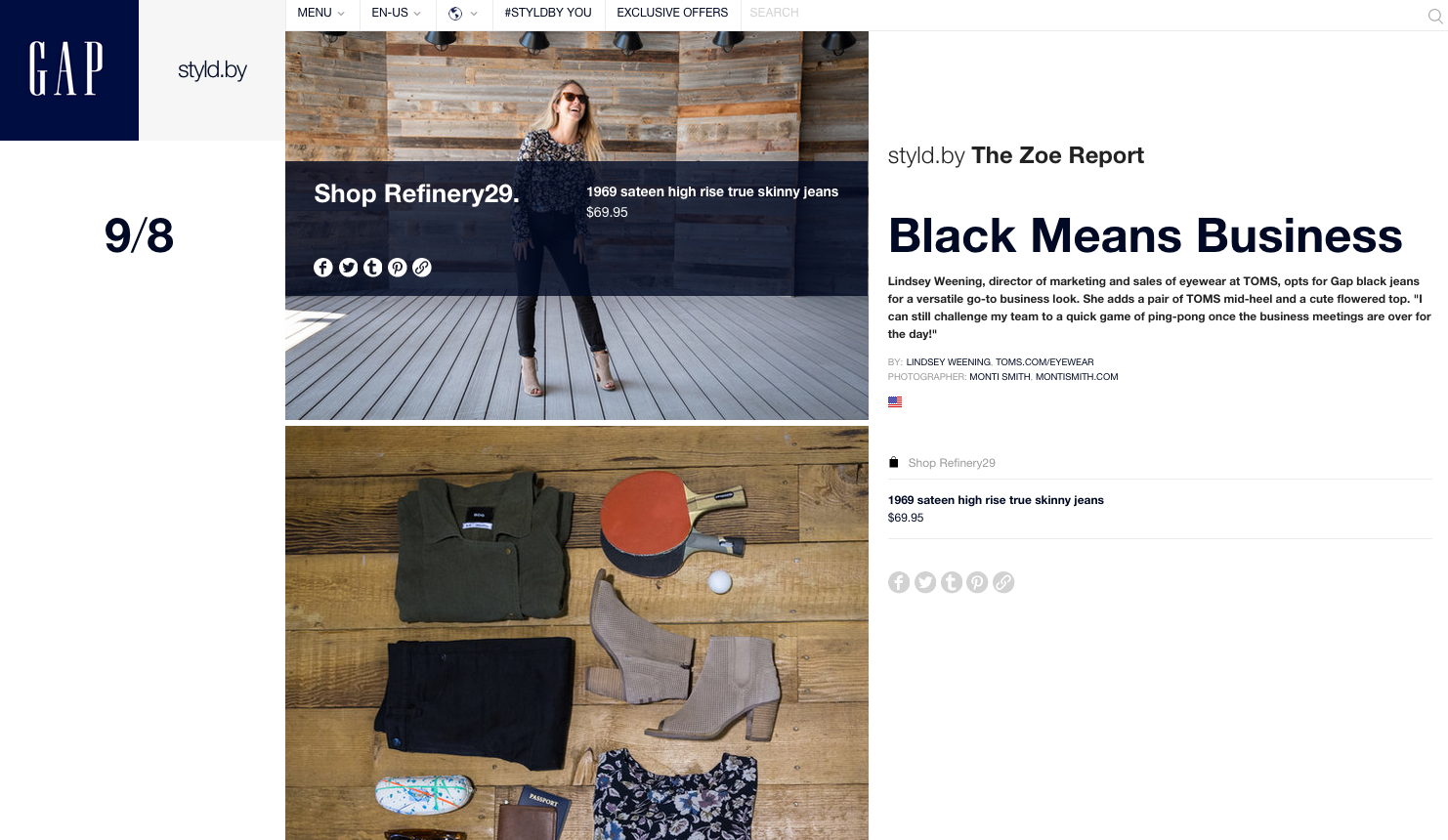 Here are a handful of influencers who participated in Gap’s campaign:

Sandra Riley Tang, musician for The Sam Willows: Tang’s self-styled looks are shared on her Instagram to her over 50,000 followers.

Listening to other great music and getting inspired in a pair of Gap Dobby stripe shorts. 🎤 #gapsingapore #styldby #sospatecular

Caitlin Crosby, singer-songwriter and philanthropist: Crosby’s looks are styled by The Zoe Report and photographed by Monti Smith. She shared her looks on her Facebook and Instagram (over 40,000 followers combined).

With 61% of consumers having based a purchase decision on blog content, bloggers have a significant amount of authority in the digital sphere. By working with influencers from a variety of fields, Gap was able to tap into already existing loyal audiences by featuring the influencers on Styld.by and having the influencers post the content to their personal social media channels. The Styld.by content hub encourages users to explore looks and trends by season and become inspired to share their personal style with the #styldby hashtag on Instagram, Twitter and Tumblr. Styld.by also lets users shop the looks featured directly through the site, making the experience seamless, interactive and user-friendly.

Voting for our #ULTIMATEVEGAS contest has started! Visit @BELLAGIO and vote on your favorite photo. The image with the most likes after 24 hours will win its owner a trip to Las Vegas! A photo posted by BEAUTIFUL DESTINATIONS (@beautifuldestinations) on May 26, 2015 at 9:29am PDT

Here are a handful of influencers who participated in Bellagio Las Vegas’ campaign:

Markiplier, the second biggest YouTube gamer in the world with over 9 million current subscribers, posted content primarily on Instagram, where he as over 1 million followers. He also posted a video celebrating 8 million YouTube subscribers, with a nod to the Bellagio for making it possible to reach such a milestone.

I’m in a HELOCHOPPER!! Happy 8 Million subs, I recorded my thank you video in the sky! 😀 @beautifuldestinations @bellagio

Wow.. LOOK AT THAT… helicopter. Thank you for such an amazing week @arialv @bellagio @beautifuldestinations.. Now off to LA!

Jack Morris, founder of online lifestyle and travel blog Doyoutravel, shared several snaps on his Instagram with his almost 900,000 followers, of his time at the Bellagio.

Good afternoon from Vegas! This is the view from my suite at the Bellagio. Thanks to @bellagio and @beautifuldestinations for hooking me up! Now that the jet lag is wearing off I’m looking forward to the next few days! 😉

The eight-week campaign touted original, on-property content created by a group of 20 influencers which was then shared to their Instagram, Vine, YouTube, Snapchat, Facebook and Twitter accounts. A UGC contest supported the influencer campaign, allowing users to upload their most epic travel photos with the #UltimateVegas hashtag. The image posted on Bellagio’s Instagram that garnered the most likes after a 24-hour period would win an ultimate trip to Las Vegas. To date, there have been close to 43,000 posts tagged with #UltimateVegas. The contest served to further the awareness and momentum of not only the campaign, but also of the Bellagio Las Vegas property.

For an influencer campaign of this proportion, be ready to spend some big bucks. Working with influencers of this caliber doesn’t come cheap, but if you have the budget, the benefits can be great. For brands that haven’t partnered with influencers on a campaign like one of these, don’t worry. This tactic is growing in popularity, but unlike other trendy marketing strategies, influencer marketing won’t be going anywhere anytime soon. Refer to our Stealworthy Strategies, get your Benjamins ready and we’ll see you in the Winner’s Circle!

Jennie Ahlgren – I'm like a Jack-of-All-Trades when it comes to client service and project management for several print and digital clients. I have a b… MORE 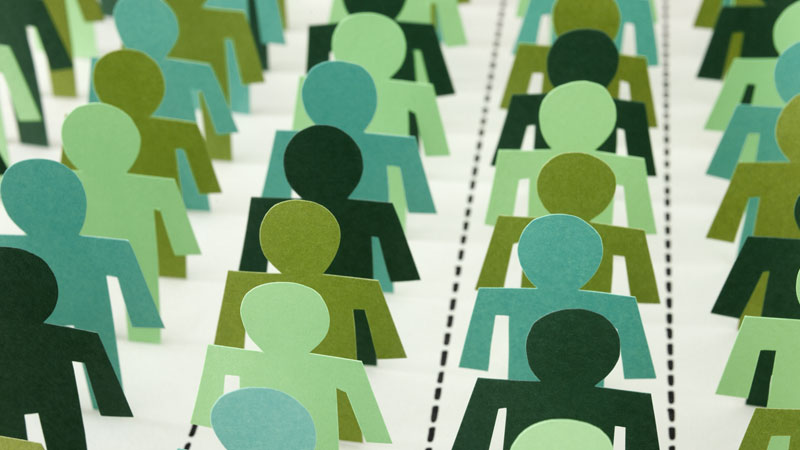